Last weekend I officiated a wedding. Because apparently, it’s all the rage to have a totally unqualified person marry you.

Which is kinda perfect because people who get married are usually equally unqualified to do so.

I decided that I wanted to marry my husband on our first date. While that sounds romantic and all, it makes no sense whatsoever and is totally insane.

Most of us can hardly decide what to order at Starbucks let alone who we want to spend the rest of our lives with.

But we do it all the time. In Las Vegas alone, there are more than 300 weddings a day, which indicates to me that getting married seems like a super-great idea when our cognitive functions are impaired.

We know the statistics. Half of all marriages end in divorce. And I would wager for the fifty percent who stay married, most would agree that things didn’t turn out quite the way they’d expected.

Which is why I wasn’t surprised the topic, “Marital Advice No One Gives You,” got the most votes for my Friday blog.

What did surprise me, however, was that all of the people who voted for this topic were currently married.

So the advice I’m giving is not really meant for the doe-eyed couples who are engaged or newlywed. There’s loads of advice for them out there, nonsensical stuff like, “Never go to bed angry.” Which in my opinion is actually a very good idea when the alternative is stabbing your spouse with a fork.

Or my personal fave, “True love means never having to say you’re sorry.” Which in my opinion is a very bad idea unless you want to wake up with a fork sticking out of your forehead. 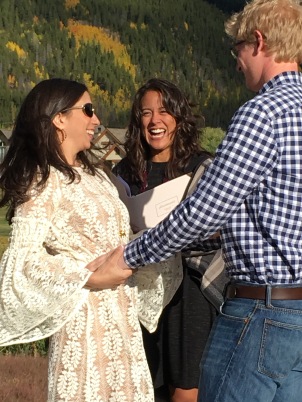 No really, I’m not kidding. You’re going to want to stab him with a fork someday.

Rather, this post is for those of us who are in the trenches, slogging it out. Married for a while, maybe with a kid or two. Because this is when we need marital advice most of all.

Marital Advice No One Gives You

I am no expert on marriage. Just ask my husband. After seventeen years, we’re still figuring out how to “fight fair” and not stab each other with forks.

But here’s the deal. No one is an expert at marriage. And perhaps that’s the last piece of advice I’ll leave you with.

So keep doing your best, keep slogging it out, and whatever you do, keep trying.

Sharing is caring. Send this post to your  ride-or-die homie. (Or a newlywed, just for kicks). They’ll thank you for it.

Oh, and send me a suggestion for next week’s topic! It’s a write-in ballot this time.

Wait. What? Sorry Mr. Doctor Man, but you’re going to have to shove that baby right back up in there because I already have my baby girl’s name picked out and I know what she’s going to look like and she definitely doesn’t have a penis.

That was my response to the birth of my first child. Along with whispering, “Shit,” as they lifted him proudly to my chest. And then, of course, loving him like crazy.

I should have found out the baby’s sex ahead of time, but I thought it would be super-cool to be surprised. I didn’t appreciate how not knowing could turn into believing like I believe in gravity that it was most definitely 100% a girl.

I’m sure a number of factors were involved in my delusion. The most notable being that I believed raising a girl to be a strong woman might be the most important thing I could ever do in my life.

Boy was I wrong (pun intended).

Fast forward a couple of years. I’m at the playground, pushing my son on the swings. Into my hands and then away he goes. In that moment, for the first time, I realized my baby was becoming a little boy who would someday become a man. And just like the motion of the swing, he would pass from my hands into the world.

“What kind of man will you be?” I wondered. And it was then that I understood raising him to be a good man, a brave man, was just as important as raising a girl to be a strong woman.

I just didn’t know how hard it would be. Or how much courage it would take on my part.

Our boys are expected to be strong, which means they are taught to suppress and deny their emotions. The only real emotion they’re allowed (and often encouraged) to express is anger.

Which is like giving them one awful-colored crayon to color with for the rest of their lives.

Schools label our boys for “acting out” in class, even though we know (like, research-has-proven-this-as-a-fact know) that boys need physical activity and interactive learning environments to thrive.

Sit still, be quiet, and pay attention are not boy-friendly expectations. But that’s how most of our schools are set up.

And perhaps worst of all, boys double-dog-dare each other into being more masculine, humiliating each other with accusations of acting “like a girl.” Which simultaneously teaches our boys to view femaleness as weak/bad/dumb/totally inferior.

And that’s not helpful to anyone. Especially women.

So what can we do to raise brave boys?

Boys with a full palette of emotion to express themselves and understand others? Boys who are celebrated for their exuberance and passion, not sent to timeout? Boys who respect girls and later, respect women?

For me, the answer was that I had to be brave myself.

I had to be brave enough to say, “It’s okay to cry,” even though I was so afraid that someday he might be teased for expressing his feelings.

And when he did express his feelings, especially his anger, I had to be brave enough to meet it with compassion instead of punishing him, even though I was so afraid that he might turn into a bully or worse.

I had to be brave enough to advocate for him at school. I volunteered in his classrooms so I could develop a productive relationship with his teachers, all of whom thought he had ADD or a learning disability.

And I taught him to be brave for others, to use the power he has as a male to do good in the world. Especially with his boy peers. He’s defended girls who were called fat, Mexican-American kids who were told they should be deported.

Last year, he stood up in front of a room full of boys and taught them the value of “respect” after they’d made fun of a transgender person.

I no longer wonder what kind of man he will be. While he still has a few more years of his boyhood left, I know. 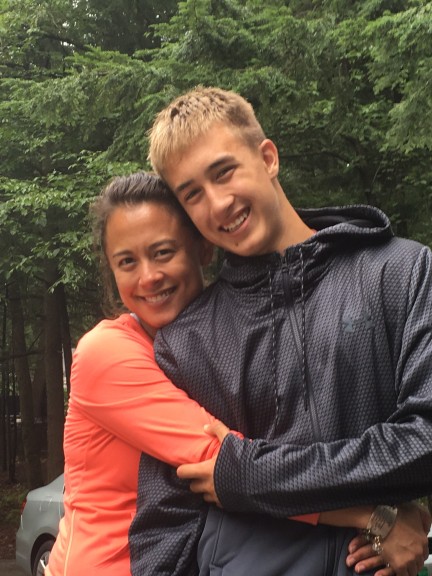 Sharing is caring. Send this to a parent who wants to raise a brave boy. Or one who already has.

Oh, and don’t forget to vote for next week’s topic! I’m posting every Friday and want to write about what most interests you. Survey is below! xoxoako

I imagine this title may generate a bit of curiosity, especially in a blog dedicated to women’s development.

And because, generally speaking, women have a lot of questions about men.

To illustrate this point, here’s a quick summary of the questions I’ve had about men, sorted by decade:

Most of these questions center around being in a relationship with a man, but The Man Question has nothing to do with dating or marriage.

It’s a question posed to me by a male reader (of which I think there are about two) who responded to my invitation to submit writing topics for this blog. And it was this:

“How can I be a good father to a little girl?”

Are you trying to break my heart wide open right now? Because you totally just did.

After a few days of mulling The Man Question over, here’s what I came up with.

1) Respect their mother. The way you treat her mother will be how she thinks she should be treated. In fact, she will most likely end up marrying a man who is just like you. Which I know is scary because you’re still figuring your own self out and that’s a lot of pressure.

So here are a few quick tips:

If you want her to be talked to nicely, talk to her mother nicely.

If you hope she will be appreciated for her awesomeness, appreciate her mother’s awesome.

And even if you’re divorced, you can still honor whatever it was that brought you two together in the first place by being respectful.

2) Do your chores. Seeing you participate in traditionally female roles (cooking, cleaning, caregiving, etc.) will free her of the expectation that women must somehow “do it all.” This expectation comes at a cost to their careers, future income, and leadership aspirations.

So if you’re not already doing so, please pick up a broom, cook dinner, drive the kids to daycare – whatever – because equality must start inside of the home if we’re ever going to achieve it outside of the home.

3) Make her tough. I know having a girl child is a melty-melt experience for most fathers. When our own daughter was born, my husband treated her like a delicate little flower.

As much as I love this, it’s super not helpful because that delicate little flower is going to have to go out into the world and deal with some pretty tough stuff.

So make her tough.

Get her into competitive sports, remark on how strong she is (because she is), tell her she’s as good as (if not better than) any boy.

When she falls, encourage her to walk it off. Because she’s going to fall, be pushed over, and tripped, just like the boys if not more so.

I know it’s scary to raise a daughter. I have one myself. Compared to my son, she will be more vulnerable, she will experience more challenges, she will wrestle with more doubt (her own and others)…

At the end of the day, she will have a father who respects her mother, who models equality home, and who shows her that she is tough enough to handle her own life.

A father who believes in raising brave girls who then become brave women.

Sharing is caring. Send this to a brave man who wants to be a good father to a little girl. (That little girl will thank you for it.)

Oh! And as you may know from last week’s post, Write Like a Mutha, I’m blogging every Friday now, in a way that’s more interactive with you. Use the survey below to vote for next week’s topic! xoxoako

Heirlooms as political statements.
If ever there were a shirt to sum up all the things - pandemic, racial reckoning, Trump era, homeschooling (yes, it was that bad), and winter in Vermont - this is it.
She wrote a kick-ass book titled “Lead from the Outside” that tells her story and gives practical advice for leading in a racist and sexist world. If you read it, LMK and we will discuss!!
In college I read a women’s health book titled “Our Bodies Ourselves” that taught me to see my body as *mine* free of labels and judgment and shame, the object of my own creation and no one else’s.